The Leaf turns 6 years next month. Time for a long due update!

The Leaf has now more than 125,000 km and so far no major issues. With the full warranty long gone, the only out-of-warranty thing that broke and had to be replaced was the driver’s side power window switch. In terms of maintenance, an annual service check is all that takes to keep it running in good shape. While the Leaf is already rolling on its second set of summer tires, the brake pads are still the original ones and the car is yet to need any brake service. Battery capacity has been dropping as predicted by Nissan, (about 4% per year). Leaf Stat now showing an SOH of 76.1%, which translates to about 16.3 kWh of usable capacity.

With lower capacity comes shorter range. Even during the summer, I rarely get more than 120 km of estimated range. Fortunately, thanks to the Province of Ontario, there are now about a dozen DCQC fast chargers installed in and around the Ottawa region, which in practice extended my range significantly. In addition, the Province Quebec has even more fast chargers available at the other side of the border. We can now easily drive to places like Montreal, which used to be a challenge in the past. 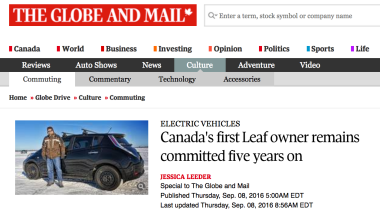 Last year was the fifth anniversary of the Leaf’s first delivery in Canada. I gave an interview to The Globe and Mail discussing my ownership experience. Other news outlets like the Green Car Reports and Auto World News also published related stories. By re-reading the interview, here are a few things I would add based on the events from year #6.

Still no problem driving in the winter but the drop in capacity is starting to take its toll. To complicate matters a bit, we’re moving to a new house next year, about 50% farther from work, so a longer commute with a smaller battery will be more of a challenge. The good news is that there are at least two fast chargers operational right now on the new route, which I’ll be able to use in case of emergency.

Last year I said the EV rebate in Ontario had gone up from $8,500 to $12,000. Well, now it’s at $14,000! The Leaf has never been so affordable in Canada. On the other hand, the plans for a super off-peak electricity rate overnight haven’t quite caught up yet. Apparently determining the hours for such tariff is a bit of challenge for the province given the fluctuating nature of low demand and negative costs.

Our average all-in cost per kWh over the years.

A lot has been said about “sky rocketing” electricity costs in Ontario, but frankly I really haven’t seen anything like it on my bill. I understand residents of rural areas are paying high delivery costs, and on-peak rates are indeed much higher than we were used to pay before time-of-use was in place, but our house is deep inside the city and we put an extra effort into shifting 80% of our consumption to off-peak hours. As a result, we haven’t been really seen a significant increase.

I’ve been monitoring our own electricity usage for years and this is what I see on our bill: Between Jan 2013 and Mar 2017, our average kWh rate (all-in) went up 20.5%. That’s it. About 4.7% a year. While that’s well above inflation, I wouldn’t call that sky rocketing, especially when gasoline can go up the same amount in one week without any warnings.

Reality is, the cost of driving with electricity continues to be very small compared to driving with gas. About 75% cheaper. In our case, it is as if we were paying about 25 cents a litre (instead of a dollar). In places like Quebec, where electricity is cheaper and gasoline is more expensive, the savings are even greater.

Update: The day after I wrote this, I checked the electricity rates at the Hydro Ottawa website and realized it’s election year! LOL As a result, “as of July 1, 2017, your electricity bill will be reduced by 25% on average if you’re a residential consumer. This includes all households across Ontario.” — I re-did all my calculations and we’re now paying the same off-peak rate we were paying in May 2012!

My biggest surprise is actually how well our 2012 Volt is performing. While our Leaf has lost 24% of its battery capacity, the Volt has absolutely no battery degradation (not that we can notice, at least). This past weekend we went on a long trip and measured how many kWh it would be able to use on a full charge. Over the years, I noticed that this number varies, hovering around 9.7 kWh and 10.1 kWh, while the nominal value in the specs is 10.3 kWh, but we never got that. On the above image, you can see that it still offers the same 10.1 kWh of usable capacity even after 5 years and 93,000 km. Even if you compare it with the official 10.3 kWh, the Volt still has 98% of its original capacity which is very impressive after all these years.

The reason is of course the active thermal management present on the Volt but not available on the Leaf. This is the single most important thing I’m expecting to be introduced on the 2018 Leaf to be announced next month. If the Leaf continues to be air cooled, I don’t think I’ll get another Leaf again.

The Leaf has evolved from a 24 kWh car to a 30 kWh, and we’re now expecting a 40 kWh version (or higher) to be announced next month. The Chevy Bolt was launched late last year with 60 kWh, and the Tesla Model 3 has an 80.5 kWh battery.

We still don’t know when the Model 3 is going to be delivered in Canada. Most likely estimates, for someone who doesn’t work at Tesla and doesn’t own a Tesla, is end of 2018, which is actually not a bad timing for us. The only question is if we’re really going to afford a Model 3 (the word “affordable” before “Tesla” is very relative). The good news is that there will be a few other options available by the end of next year. The Bolt will be more mature, and hopefully have more discounts, and the Leaf may also be an option (assuming not air cooled as per above). One way or the other we have time to decide, and all indications are that both Leaf and Volt will hold just fine until there. Fingers crossed.