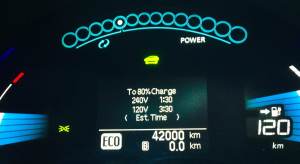 Our LEAF turned two this week. It’s been an absolutely great experience. The LEAF has been performing very well, we haven’t noticed any battery degradation and it’s still a lot of fun to drive, like day one.

This week I took the Leaf for its 24-month scheduled maintenance service at Hunt Club Nissan, the dealership where we took delivery two years ago. According to the maintenance guide, the service should have included replacing the brake fluid, replacing the in-cabin micro filter, rotating tires and a inspecting a long list of items. Interesting enough, absolutely nothing needed to be replaced! Tires were rotated, the battery was tested, items were inspected and that was it. Details below.

The brake fluid still looked like new and didn’t need to be flushed. That would have been a costly service that I’m glad the Leaf didn’t need. As for the brake pads, it’s about the same story: We still have a long way to go before we need new ones. That’s one of the best things about regenerative braking. It recovers kinetic energy back into electricity without actually using the regular brakes like in regular gasoline cars. Brake pads are only called into work when the car is just about to stop, or if you brake too hard. 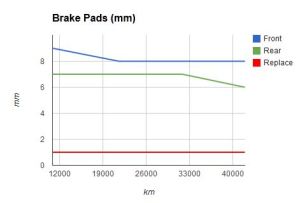 Brake lining after each maintenance service.

Brake pads are recommended to be replaced when they are 1 mm thick. They were first measured at the first 6-month service, when the Leaf had about 10,000 km. Since then, both front and rear brakes only lost 1 mm of thickness. At this rate, I estimate I’ll only need to replace them at 186,000 km (rear) and 248,000 (front). Pretty good, eh?

Nissan recommends changing the in-cabin microfilter every year. The dealer replaced it last year but the old filter still looked pretty clean. Besides, the replacement cost was a hefty $72. Later I realized you can purchase the filter online (for $15) and replace it yourself. That’s what I did this year but I decided to delay the replacement until after 18 months, to wait and see how dirty it gets.

The original Ecopia tires are still doing well, given that we only use them 8 months a year (we switch to winter tires during the other 4 months). The tire tread depth on all four tires have dropped from 7 mm to 5 mm (6/32″). The minimum depth recommended for summer tires is 1.6 mm (2/32″) so they still have a long way to go. At this rate, I estimate we’ll need to get new summer tires at 75,000 km.

The Battery Usage Report, which is a mandatory test required by the warranty, passed with flying colors, or five stars, in all categories (charging, driving and storage). The Leaf still has 12 bars of capacity, which is great. Any drop in capacity at this point is still not noticeable.

I’ve been keeping track of the Leaf’s performance since day one. In these two years we used 5.5 MWh ($658) of home electricity, plus some trickle charging at work, camping sites and the few public charging stations currently available in Ottawa. I estimate that driving the same 42,000 km with our second car, a Toyota Corolla, would have cost us $4,750 in gasoline, plus $250 in oil changes, plus $200 in additional insurance (yes, our insurance company has a fairly good rate on EVs). In total, we have saved $4,542 so far by driving with electricity, or almost $2,300 per year. Over ten years, which is the amount of time we intend to keep the Leaf, the total savings will probably be enough to buy another Leaf!

So far, there were three things that had to be replaced under warranty. The parking brake actuator, the Telematics Communication Unit (TCU), and the power lock in one of the rear passenger doors. Out of the three, only the parking brake actuator needed an emergency service, although I was still able to drive the car to the dealer. The electric power train on the other hand has been working flawlessly.

After two years, there were only two things I had to replace on the LEAF as part of a regular maintenance: the cabin air filter, which I already mentioned, and more recently, the two front wipers in preparation for its third Canadian winter. The dealer performed the two mandatory annual services that included software updates (no cost). I also chose to perform the optional six-month services in between, mostly because they fall right after the salt-and-sand season we call Ottawa’s winter. The scheduled services cost an average of $136 each (excluding the cabin air filter).

What can I say about Carwings? It stopped working again last week. I called technical support, they asked me to check the configuration, like they always do, but the car completely lost two way communication with the network. Sigh…

Even though there are quite a few public charging stations now in the Ottawa-Gatineau region, they are all Level 2 stations which still take a long time to charge. DC Fast Chargers are still not available anywhere, not even at dealerships like in the U.S. Unfortunately Nissan Canada hasn’t done any effort to get them installed north of the border and that’s particularly frustrating. DC Fast Chargers would allow me to do trips that I can’t do today in any practical way. It would be a game changer for EV adoption but it’s not a vision shared by manufacturers in Canada (other than Tesla, who’s right now is building super chargers at the 401in Kingston).

The Leaf is definitely the car we drive the most in the family. Our second car (my wife’s car), which we also use for longer trips, only drove 17,000 km since we first got the Leaf. In other words, the Leaf drove 2.5x as much as our gas car, showing that we only drive it when we really have to.

We love to drive the Leaf. Even my son is driving it now. That’s why it’s so frustrating to take the gas car on a longer trip that we know the Leaf could do if only the Nissan dealership along the way had DC Fast Charger.

It’s been 17 months since we first took delivery of our LEAF. Yesterday, as I was driving to work, I had to pull over and take this picture as we had just hit the 30,000 mark. For us, it’s an impressive milestone. I don’t think we’ve ever driven any of our past cars that much in such a short period of time, specially considering most of the driving on the LEAF has happened within the city. For comparison, our gas car only drove 12,000 Km during the same period, which shows that the LEAF is not a good second car like many say, but it is in fact the first car in our family.

30,000 Km also means a lot in terms of savings, for both our pocket and for the environment. Our gas car would have burned at least 2,500 liters of gasoline to drive the same distance, cost about $3,125 at the pump and thrown 6 tons of CO2 in the atmosphere. By comparison, the LEAF cost us about $470 in home electricity, without any gas, oil changes or tailpipes.

In terms of issues, the electric power train has been working flawlessly and I haven’t noticed any drop in battery performance or range. There were only two issues that required service under warranty and they were both unrelated to the electric power train: the parking brake actuator got stuck and had to be replaced, and more recently, the power lock actuator in one of the passenger doors also had to be replaced. Carwings remains the single most annoying thing on the LEAF. Nothing to do with the car itself, but with frequent outages in the telemetry service.

The LEAF has also proven to be a very low-maintenance car. The only item we had to replace so far was the cabin air filter, a $20 part that you can buy on eBay and replace yourself, though I only discovered that later, after having the dealer change it for me (for $70). Without any oil to be changed, regular maintenance services are only required every 12 months. They cost the same as any regular car, minus $50 because there’s no oil change! Regular 6-month services are optional but I decided to have them performed as well because they happen right after winter for us, and its always a good idea to have things checked and lubricated after all the slush, sand an salt from ‘the Ottawa roads. They are also considered a “minor” service and cost a bit less than the yearly service.

Finally and most important, the LEAF continues to be very very fun to drive! The instant torque, great acceleration, the low center of gravity (for sharp turns!) and all the quietness and comfort make it always a very pleasant ride.

They had to replace one of the tire pressure sensors (under warranty) after I complained about a false alarm being displayed on the dashboard intermittently.

No recalls or software updates this time.